Chris Skeeters is a Marine Corps Veteran and Bull Rider. 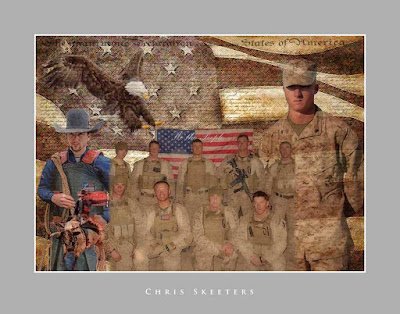 Skeeters is 26 yrs old and has been riding bulls for over seven years. He had three deployments to Afghanistan and Iraq and is a Purple Heart Recipient. He served for eight years in motor transport. Skeeters was honorably discharged in Oct 2014.  He currently lives in Tullahoma, TN but spends most of his time on the road competing in events across the country. 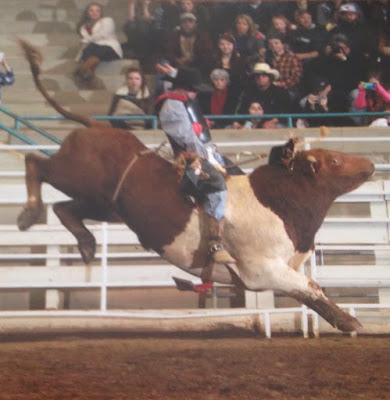 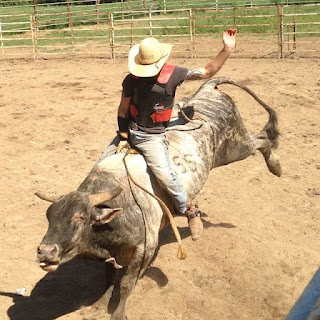 Below you will read stories submitted to WAR by Skeeters. We appreciate his taking the time to share with us his career in the arena and on the battlefield.


TOUGHNESS
To strap yourself to a 1500 lb animal you have to be tough. To share a bull riding story about toughness is hard because to make a living in this sport you have to be tough and have a lot of instances you could talk about. Probably my finest instance of toughness would be in 2012 I broke my collar bone and tore or separated everything in that area. I did not require surgery but I was told I would be out for a while. I was upset I had a big bull riding event in 4 weeks and I wouldn't be able to compete. The pain was horrible, I couldn't do anything. A couple weeks past and the pain subsided some and I made the decision to ride anyway, I knew I prob had no chance of staying on anything. The day came of the 1st round and I was hurting but I put braces, tape, and wraps on everything and man did I draw a bucker, he blew out come round to the right and I was on the ground and in pain. I was told I could have my fees back for the next day and I shouldn't ride but I said no. There was 1 score that night. Saturday night rolls around and I drew a good one. I’ve been on him a couple times and have ridden him so I was happy. The one guy who covered Friday night bucked off so I still had a chance and I put up a score. As I watch everybody else buck off I couldn't believe it I was headed to the short round leading. In the short round I picked an unridden bull and by the time it came to me I had already won so it was a matter of pride he came out and it was a dog fight but I rode him. 4 weeks off and injury I go 2 for 3 and win a nice check and a buckle.

My name is Chris Skeeters I got out of the Marines in 2012.

I could tell story upon story of experiences while I was in but instead I’ll tell you about an entire deployment.
I was assigned to Combat Logistics Battalion 2. During our time deployed to Afghanistan we experienced many hardships and tough days.

There were good times but most were outweighed by the bad.
There were times when we wanted to leave but we knew we couldn't because it would mean giving up on our oath to our brothers.
It was around Thanksgiving and we were all joking around trying to keep good spirits because we all wanted to be home for the holidays, we sat in the mess hall joking and talking about what we would do when we got home.
We never knew some of us would not make it another week and this would be our last holiday together.
The following week was very hard. It happened in an instance and there was lots that was left unsaid.
This story is familiar to thousands of deployed service members throughout every branch.
Why did it happen to them, was there anything I could have done, and why wasn't it me?
The days I spent in the corps were great and lots of life lessons were learned.


Throughout a military career you are taught to have confidence in your brothers and sisters in arms, in a civilian world you are not instilled those concepts. As a group Warriors and Rodeo continues the traditions instilled through service to the country and provides members of the group an opportunity to have someone to talk with, have a place to stay in times of need, and be provided gear to continue their dreams in the sport of rodeo among other things. As a Marine Corps veteran and a bullrider I have met many ppl across the country and the world and some of the most giving and selfless people are associated with this group.

WAR wants to thank you Chris for your service. It is a debt that can never be repayed. And we pray for the families of those fellow Marines lost in battle.


If you are interested in sponsoring or donating to Skeeters bull riding career please contact sheri@thelemonadedigest.com Sheri is a PBR Certified Sports Agent and 100% of your donation and sponsorship will go directly to Skeeters. Sheri does her agent work for free for all service members.
Email ThisBlogThis!Share to TwitterShare to FacebookShare to Pinterest
Home
Subscribe to: Posts (Atom)